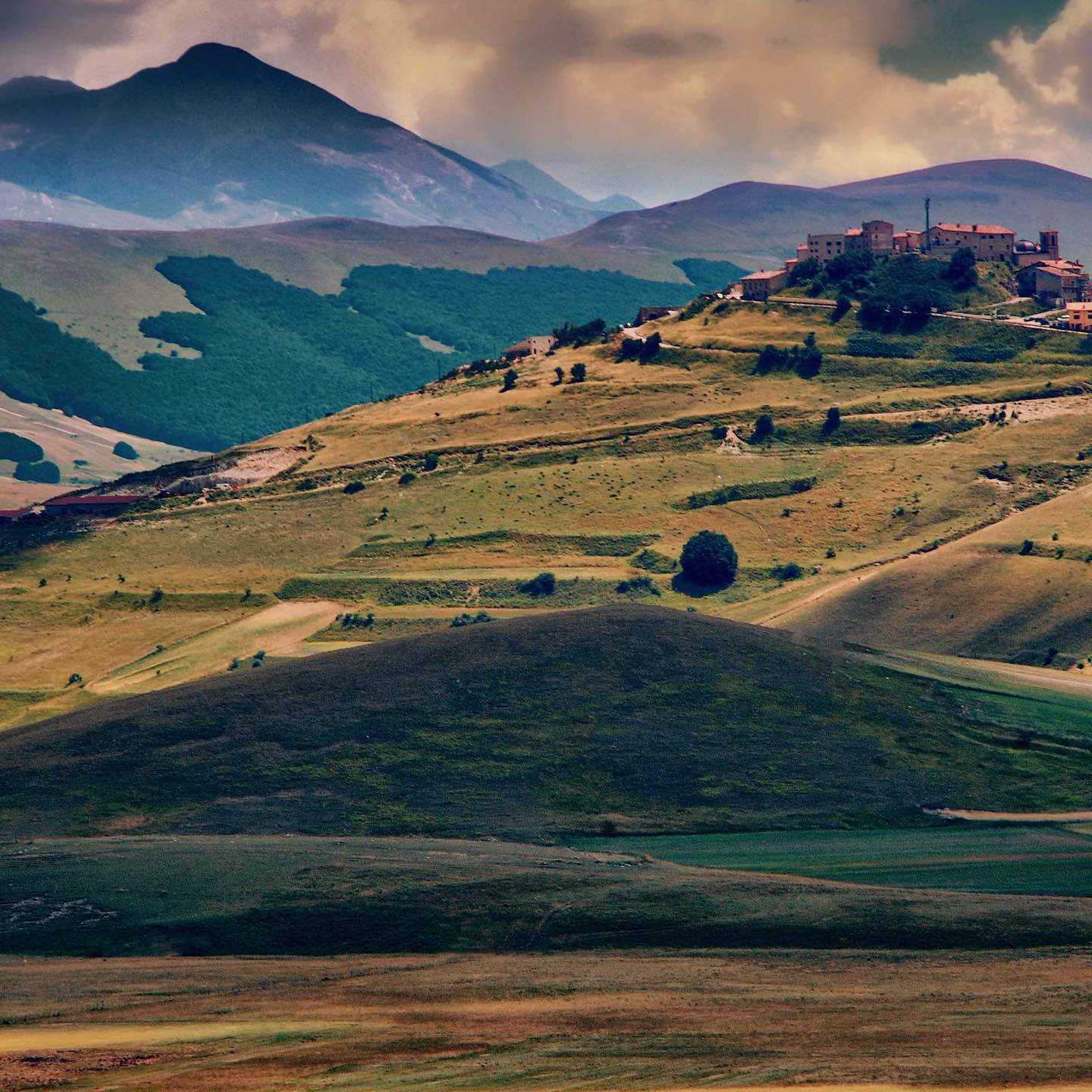 The Central Apennines, also called the High Apennines, are divided into the Umbrian-Marchean Apennines – Appennino Umbro-marchigiano or Roman Apennines in the north and the Abruzzi Apennines – Appennino Abruzzese in the south. A natural border exists between the Northern Apennines and the Central Apennines: a klippen zone, or band of isolated Liguride rocks, that follows the Val Marecchia (“Valley of the Marecchia River”) to the Marches-Tuscany border and passes through the Monti Rognosi and Arezzo in Tuscany. The west edge of the Umbrian-Marchean Apennines runs through Cagli. They extend south to the Tronto River while, in the northeast of the range, the Republic of San Marino is located on the slopes of Monte Titano. The highest peak, Monte Vettore, at 2,478 m, is part of the Monti Sibillini incorporated into Parco Nazionale dei Monti Sibillini. Hidden in the middle of the mountains of Umbrian-Marchean Apennines, we find the predominantly hilly and verdant territory of Umbria. The entire region is introduced with a follow of broad irregular valleys that compose a green undulated panorama, reason for which Umbria is often defined as the Green Heart of Italy. The extraordinary vegetation of this region is fed by abundant calcareous water present in the subsoil, and by the Tevere River that flow through the land.

Formerly occupied by two lakes today drained – the Lacus Clitorius and the Lacus Umber – Umbrian Valley, the second-largest valley of the region, is a vast alluvial plain that extends from Spoleto to the beginning of the Tiber Valley. Topino River and its tributaries irrigate the valley – encircled by the Apennines System to the east and by the Martani Mountains to the west. In this part of Umbria, an incredible microcosm can be found.  Beautiful mountains, gently rolling hills home to the famous Sagrantino wine, town and villages steeped in history and art, and many vineyards and olive groves, where some of the best olive oil in Italy is produced. Wandering around this area of the region means getting lost in the ancient history of its people, literature, art, nature and excellent natural local food such as legumes, cereal grains, olive, grapes, cheese, honey and vegetables.

Lake Trasimeno is located in the northwestern part of Umbria, on the border between this latter and Tuscany. Its surface area covers 128 square kilometres, and it has a circumference of almost 45 km, making it the largest lake in central Italy and the 4th largest of the whole country. The territory of the Regional Park extends along the perimeter of Trasimeno Lake and includes three islands: Polvese Island, Maggiore Island and Minore Island. Set among the gentle hills of Umbria with its luxuriant canebrakes and clear and shallow waters rich in food, the lake has always represented an essential rest and wintering area for the aquatic birds and an ideal habitat where several fish species live and reproduce. The woody hills surrounding the lake create a breath-taking landscape of extraordinary beauty at any time of year. They are dotted with olive groves and vineyards, which produce olive oil and wines of excellent quality. Products are deeply linked to the local environmental features of the lake and the countryside. So, while Trasimeno Lake provides a significant quantity of fish with tasty and delicate flesh, the countryside offers a wide range of legumes and fruits including some unique local products such as black-eyed peas and greens beans.

Valnerina, a green valley whose name derives from the Nera River that passes through it, is a magnificent territory in which nature; history, popular traditions and gastronomy coexist. Travelling upriver, the Valnerina plateau clearly shows the imprints and traces left by millennia of human presence in the area and the culture of the populations that live along the Apennine Mountains. Fortresses and medieval towers, fortified abbeys and the hidden-away caves of solitary hermits, tiny hamlets with steep, narrow streets, endless woods and clear streams.

Surrounded by lush vegetation, the Valnerina amazes with the sheer majesty of the mountainous landscape surrounding the Nera River rich with breath-taking scenarios.  The blooming of Castelluccio di Norcia plains in summer, the Marmore Falls, waterfall constructed by the Romans where the waters of the Velino River dive over a cliff into the Nera River below: a magnificent spectacle that has been going on since the year 217 BC. Over the centuries, the solitary, intense woods and rugged, isolated mountains have been home to hermits and monastic orders in search of unique places in which to dedicate their lives to God and meditation. The main local products of this area are truffle and summer truffle, Pecorino cheese, honey, trout, norcineria – cold cuts, legumes such as cicerchia – chickling pea, roveja, spelt, lentils, and saffron.

The Martani Mountains extend evenly from South to North for about 45 km between the provinces of Perugia and Terni bordering with the Umbrian Valley, the Tiber and Naia valleys and the Terni basin and Nera River. The Martani chain is part of the Umbrian-Marchean Apennine, although representing a distinct geomorphological entity. From a geological point of view, these mountains – a system of folds and thrust faults arranged to form an arc in eastern convexity – are made out of marine sediments, especially of limestone from the Triassic era. The vegetation is rich and varied, and it is possible to explore variegated forests populated by oaks, elms and beeches. The real peculiarity of the Martani Mountains is the abundance of caves, sinkholes, and gorges, borne of the erosive effects of water and time. The successive hills and slopes that encircle the old centre of Amelia create one of the most impressive landscapes of Umbria.  An ideal composition of altitude, climate and soils that makes an extraordinary legacy in the varieties of wines and other local products such as traditional handmade pasta, cured meats, legumes, pasta sauces, DOP extra virgin olive oil, honey, fresh milk and a wide range of dairy products typical of the region.

Encircled by Alpe of Catenaia on West, and calcareous, glowing rocks of the Alpe of Luna on East, the Tiber Valley is anchored in the heart of Italy. Stretching from the North of Rome to the South of Tuscany, the valley includes municipalities situated in significant part along some of the main consular roads – Via Amerina, Via Flaminia, Via Salaria, and Via Tiberina – that flank the river’s course. Before Romanization, ethnically and linguistically distinct peoples inhabited this area: the Etruscans, Capenati, and Falisci on the right bank and Latins and Sabines on the left; for all of these populations, the river was essential to cultural and commercial communication. The Tiber’s source is located in the slopes of Mount Fumaiolo in Romagna. It runs through the entire length of the Upper Tiber Valley for 50 kilometres providing it with excellent fertility. Nestled between Umbria and Tuscany, the Upper Tiber Valley is enclosed by the picturesque Apennine hills all the way from Sansepolcro to Umbertide depicting what looks like a fresco by Piero della Francesca. Castles, abbeys, old parish churches and medieval towns rich in traditions and history rest on the hills inviting to discover this land which offers an old fashion type of hospitality in creating an atmosphere of tranquillity challenging to find in any other place. Farmhouses can be found all over the countryside as if they were guardians of the fields. At the same time, the people of this region have been master hunters and gatherers for centuries, reason for which wild mushroom varieties (porcini), Tartufo Bianco e Nero (white and black truffles), cinghiale (wild boar), coniglio (rabbit) are foods typically found on kitchen tables, while, in the fields, wheat, beets, legumes, hay and tobacco are farmed.

Located in northern Umbria, near the borders with Marche region, Gubbio borders with several municipalities such as Cagli (PU), Cantiano (PU), Fossato di Vico, Gualdo Tadino, Perugia, Sigillo, Umbertide and Valfabbrica. Gubbio’s origins are ancient. The hills above the town were already occupied in the Bronze Age. As Ikuvium, it was a famous town of the old Umbria people in pre-Roman times, made famous for the discovery thereof the Eugubine (or Iguvine) Tables in 1444, a set of bronze tablets that constitute the most significant surviving text in ancient Umbrian. After the Roman conquest in the 2nd century BC — it kept its name as Iguvium — the city remained important, as attested by its Roman theatre, the second-largest surviving in the world.

Among geologists and palaeontologist, Gubbio is also known as the discovery place of the “Gubbio layer” – a sedimentary layer enriched in iridium exposed by a road cut outside of town. This thin, dark band of sediment marks the Cretaceous–Paleogene boundary, also known as the K–T boundary or K–Pg boundary, between the Cretaceous and Paleogene geological periods about 66 million years ago, and was formed by falling debris from the gigantic meteor impact responsible for the mass extinction of the dinosaurs. Its iridium, a heavy metal rare on Earth’s surface, is plentiful in extra-terrestrial material such as comets and asteroids. It also contains small globules of glassy material called tektites, formed in the initial impact. Discovered at Gubbio, the Cretaceous–Paleogene boundary is also visible at many places all over the world. The characteristics of this boundary layer support the theory that a devastating meteorite impact, with accompanying ecological and climatic disturbance, was directly responsible for the Cretaceous–Paleogene extinction event.