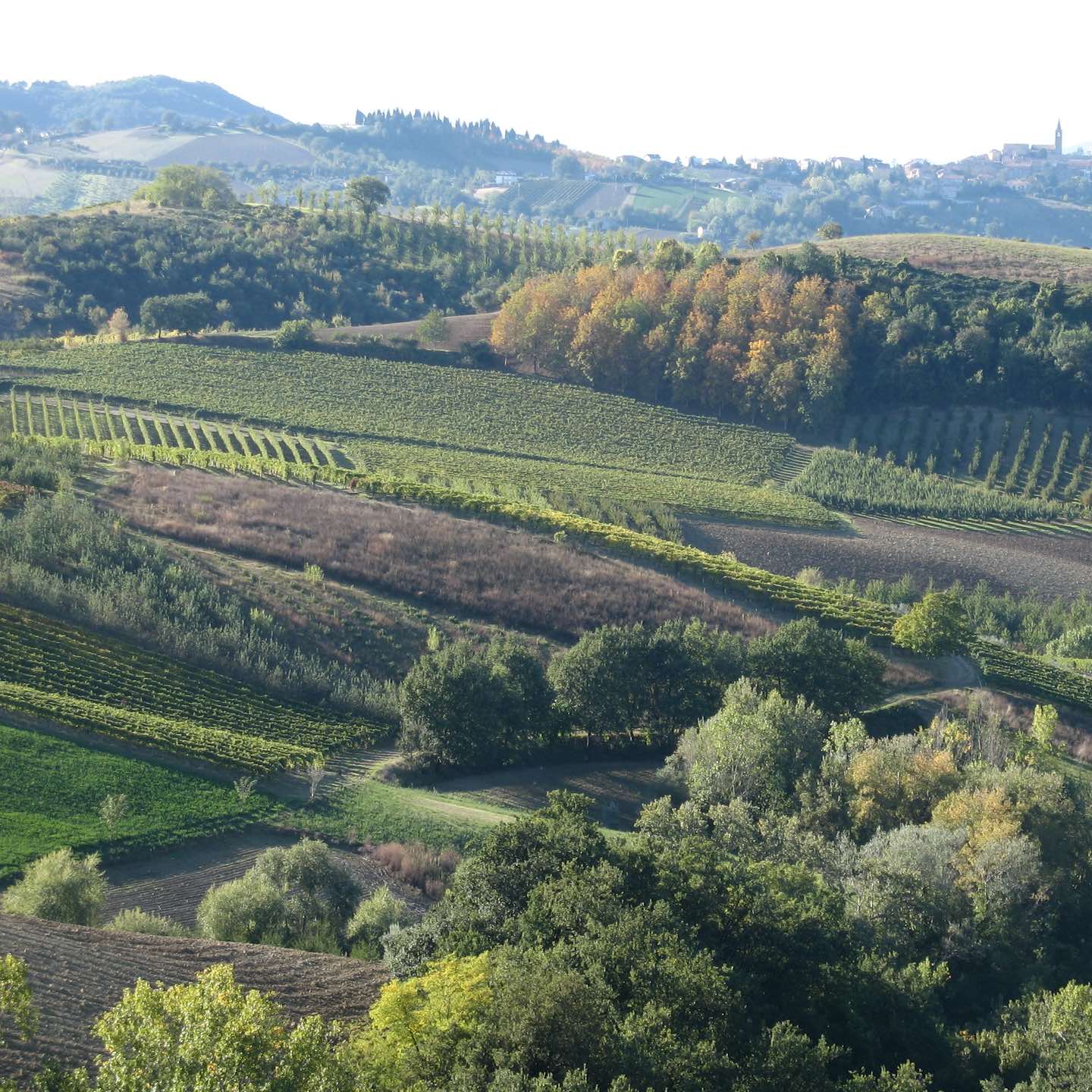 Le Marche region extends over an area of 9,694 square kilometres of the central Adriatic slope between Emilia-Romagna to the north, Tuscany and Umbria to the west, and Lazio and Abruzzo to the south, the entire eastern boundary is formed by the Adriatic Sea. Most of the region is mountainous or hilly being the main features the Apennine chain along the internal border and an extensive system of hills descending towards the Adriatic. With the sole exception of Monte Vettore, 2,476 metres high, the mountains do not exceed 2,400 metres. The hilly area covers two-thirds of the region and is interrupted by wide gullies with numerous – albeit short – rivers and by alluvial plains perpendicular to the principal chain. The parallel mountain chains contain deep river gorges, the best known are those of the Furlo, the Rossa and the Frasassi. The coastal area is 173 kilometres long and is relatively flat and straight except for the hilly area between Gabicce and Pesaro in the north, and the eastern slopes of Monte Conero near Ancona.

The Natural Regional Park of Gola della Rossa and Frasassi is the “Green Heart” of Marche Region. Created in September 1997, with its 10.026 hectares, it is the largest regional protected area and includes the subterranean complex of Frasassi caves. Characterized by historical and artistic treasures, hidden by landscapes rich in charm and harmony and immersed in an uncontaminated luxuriant nature, the park is an oasis of pure beauty that offers the possibility to admire the rich flora and fauna typical of the pre-Apennines. Interesting natural phenomena in this area are the karst excavated by water erosion of the river that for millennia has shaped these lands, creating rocky cliffs and giving rise to an underground kingdom of unrivalled splendour: the suggestive caves of Frasassi and the presence of sulfur springs. This area is also a jewel of biodiversity with its 105 species of nesting birds, 40 species of mammals, reptiles and amphibians and more than 1250 plant species. Hornbeam forests grow on the limestone hills while up to the mountains beech forests can be found. Warmer on the slopes of rocky gorges, the vegetation is typically Mediterranean with holm, oak, wild madder, terebinth, phillyrea, arbutus and asparagus. Furthermore, in the park many rare botanical species grow, among which the Moehringia papulosa, the Potentilla caulescens, the Rhamnus saxatilis, Saxifraga australis and the Ephedra major – a relict of the Tertiary Era – can be found.

Named after the legendary prophetess Sibyl that many knights and other petitioners had come to meet from across Europe in the hope of gaining a few precious pearls of wisdom, the Sibillini chain rises in the heart of Italy reaching a maximum height of 2,476 m with Mt. Vettore. The territory is a magical mix of local nature, history and culture, characteristics that have contributed in defining a unique and unrepeatable reality. With over 70,000 ha, Monti Sibillini National Park was established to safeguard the environment and promote a social and economic sustainable development. The park is, in fact, today home to 1,800 plant species and to a wild bouquet of mountain flowers including edelweiss, pasque flowers, martagon lilies, bearberries, and various orchids. Animal life includes wolves and feral mountain cats as well as prickly porcupines. At the same time, roe deer have recently been reintroduced and golden eagles, peregrine falcons, eagles, owls, snow finches, and sparrow hawks fill the skies. The municipalities present in this area seem to be part of the natural landscape too: eighteen charismatic towns, tucked in and among the mountains, are packed with historic art and abbeys, castles, and medieval burgs evidence the ancient relationship between the land and its people. Perched between the Marches and Umbria, the area is also well known for the outstanding culinary offer. Vast selection of cured meats, plus other tasty local options including apples, honey, truffles, mushrooms, chestnuts, chickpeas, chickling pea, lentils, goat cheese among which pecorino, trout and vin cotto a special hot wine cooked with spices.

The province of Pesaro and Urbino, where the Metauro and Foglia Valleys meet, is an area of extraordinary richness from both the naturalistic and historical points of view. The hilly hinterland of the Metauro Valley – whose name derives from the Metauro River that flows through it – is full of very well recovered burgs, cultural and scenic beauties such as Gradara, Mondavio, Sassocorvaro, Fossombrone, Cagli and Urbino. This latter is considered World Heritage by UNESCO and Italian national monument for being home to the prestigious University, among the oldest in Italy, and the birthplace of the painter Raphael. Despite the characteristics of the territory, mostly wooded, the agricultural sector is quite significant, especially in the pre-Apennine hills. In fact, in the inner areas of the Apennines, the number of cooperatives, farms and country houses is continuously growing. Besides horticulture and viticulture o notable importance, grains and spelt are the real protagonists of the typical dishes of the hilly and mountainous hinterland. The spelt produced in this area of Marche is the Triticumdicoccum (medium spelt or “true spelt”, a forerunner of durum wheat), also called “spelt of the Marche” the purest quality of an ancient cereal, which is officially counted among the traditional regional products. Even the livestock sector is very relevant, especially that of poultry and herds of native equine such as the horse of Catria and cattle breeds like the Marchigiana, one of the most prestigious Italian beef cattle breeds. Furthermore, the entire valley is very famous for the excellent culinary offer: from the exquisite fish gastronomy of the coast to the fragrant truffle from Acqualagna passing through the DPO extra virgin olive oil of Cartoceto and the Bianchello del Metauro and Sangiovese wines.

The Valley of Cesano is marked by its river, which originates from Catria Mount and defines the border between the provinces of Pesaro-Urbino and Ancona, washing many towns such as Pergola, San Lorenzo in Campo, Castelleone di Suasa, Mondavio and Corinaldo. Under the bed of the river, a petrified forest of 50 thousand years ago testifies a series of discoveries and excavations from the Prehistoric and Roman eras. The landscape offers a very versatile scenario: from the peak of Mount Catria, the valley descends to sweet rolling hills on which beautiful medieval castles and villages still lie until reaching to the beaches of Marotta and Senigallia, on the Adriatic coast. The pristine landscape, the presence of numerous archaeological, architectural, monumental, gastronomic and natural areas and the peculiar commitment in defending and protecting the agriculture and the territory allow several municipalities such as Senigallia, Corinaldo and Castel Colonna to be awarded the prestigious Green Flag award. In Cesano valley, the land and agriculture have always occupied an important place in daily life and, while wandering around the area, is still possible to find ancient millstones dating back to the Middle Ages. Back in those days, thanks to the strength of the waters diverted from the Cesano River, they were used to transform cereal grains in wheat, barley and cornflour. In this Valley, full of traditions, history and culture, the olive tree is not just an agrarian culture or a business but a real passion. The plant has, in fact, become a symbol for the people living in this area and, even if the production is little, the final result, whether the variety is Raggia, Leccino or Raggiola, is an extra virgin olive oil of exceptional quality. In the most internal and mountainous area of the territory, instead, many different trees such as chestnut, beechwood, firewood, manna ash, hornbeam and oak are present. Also, on Catria Mount 11 floristic protected areas were established to preserve the extraordinary ecological value of altitude grasslands, forests, cliffs, macerate (rubbles), ravines and fluvial-karst valleys.

Stretching for 1.300 square kilometres, Chienti valley, whose name derives from the river that passes through it, in the valley that “embraces” the city of Macerata. In this region of Marche, the agricultural area covers more than half of the territory, and organic farming has had a positive growth trend. In fact, the breath-taking views of the alternating valley forests, farmland and small farms, many of which, favoured by an environmental and structural context that offers the ideal conditions, opted for organic methods. These small farms represent the beating heart of this region. They are the true expression of the land to which they belong: genuine and sincere and fully committed in a rural philosophy of life, made of patient respect to the rhythms of nature and to the integrity of the territory. Tenna River, instead, springs from Montefortino, between Priore Mount and Sibilla Mount, in the heart of the Sibillini Mountains. Marking the boundary between the province of Fermo and the province of Macerata on the north, it enters in the Infernaccio Gorges of the Apennines of Umbria-Marche flowing into the Adriatic Sea on the south and delimitating an area called Val di Tenna. In this region, the extensive use of mechanized agriculture along the coastal area and the coastal hills is balanced by the vast reservoir of naturalness represented by the system of Sibillini Mountains, in which wooded territories and fields, more or less fragmented by meadows and pastures, prevail. The small niche of biodiversity between the regions of Smerillo and Montefalcone acts as a hinge between the mountainous area and the medium river valleys. Here, the mosaic of agricultural uses typical of the Val di Tenna countryside emerges. A territory particularly suited to the production of cereal grains – Marche region is in the Italian top three for durum wheat and barley production – where the high-quality wheat, along with wine, olive and honey, best represent the agricultural and gastronomic tradition of this land and its inhabitants.