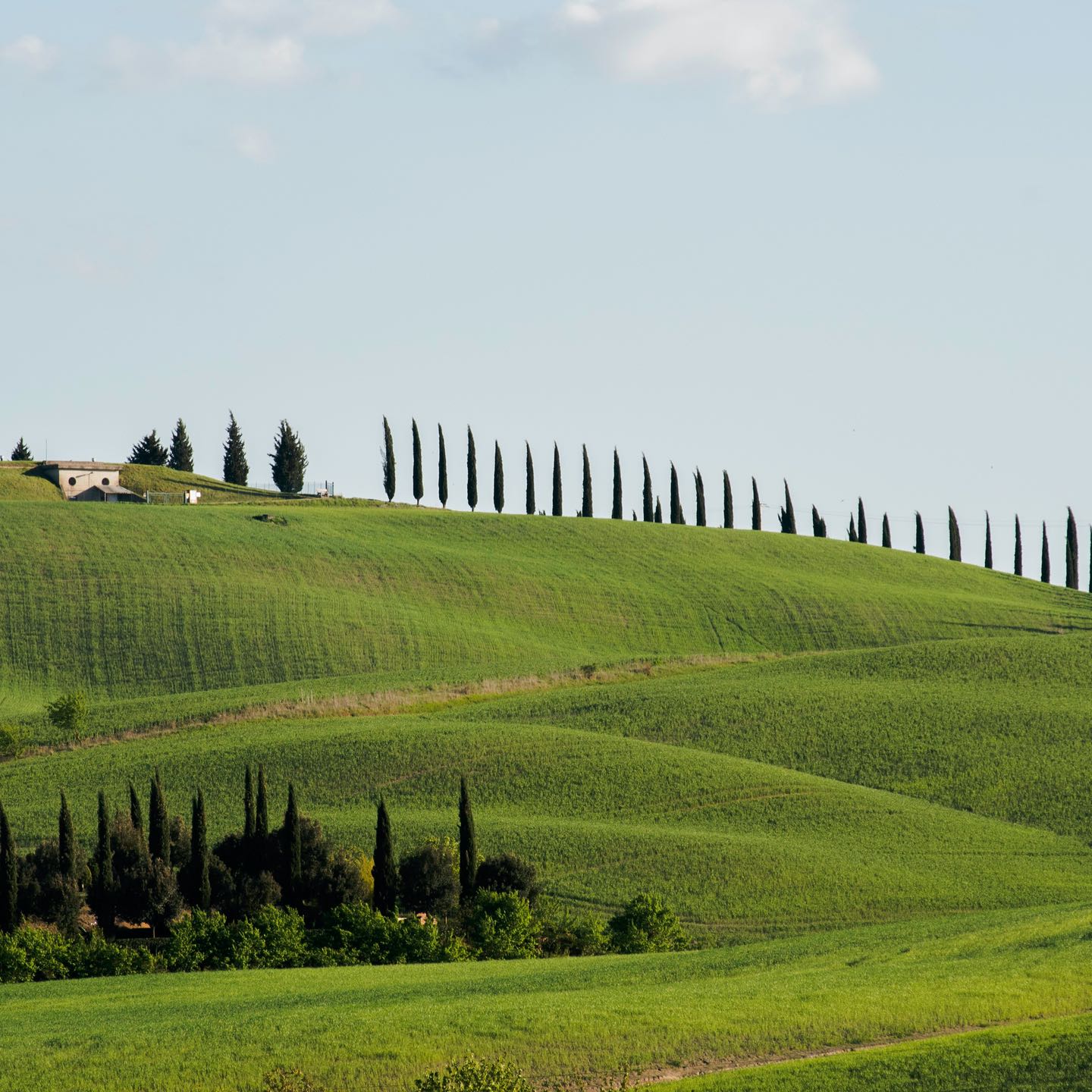 Siena is located in the central part of Tuscany, in the middle of a vast hilly landscape bounded by the Arbia river valley on the south, the Merse valley on the south-west, the Elsa valley on the north, the Chianti hills on the north-east, the Montagnola Senese on the west and the Crete Senesi on the south-east. The city lies at 322 m above sea level. The Siena countryside and hills are as wavy as an ocean, and for centuries this terrain has been considered Siena’s barnyard, scattered with farms, in which farmers have protected and preserved the beauty of this territory. The soil and geography of this region can be quite varied, with altitudes ranging from 250 to 610 m and rolling hills producing differing macroclimates. Two main soil types can be found in the area: weathered sandstone is known as alberese and a bluish-grey chalky marlstone known as galestro. The soil in the north is richer and more fertile with more galestro, while in the south the land gradually becoming harder and stonier with more albarese. In the north, the Arno river influences the climate keeping the temperatures slightly cooler, an influence that diminishes further south in the warmer territories towards Castelnuovo Berardenga.

The Chiana Valley, about 100 kilometres long, is an alluvial valley of central Italy that covers about 2,300 square kilometres on the territories of the provinces of Arezzo and Siena in Tuscany and the provinces of Perugia and Terni in Umbria. It runs north to south between the plain of Arezzo and the plain of Orvieto. It includes the watershed of the Canale Maestro della Chiana, its main watercourse, and the Northern part of the basin of the Chiani River. On the northeast, it is bounded by the Tuscan pre-Apennines crowned by the Alta Sant’Egidio at 1,057 metres while, on the Southeast; it reaches Lake Trasimeno and the valley of the Nestore River. On the west, it extends to the Val d’Orcia, where it reaches its highest elevation at 1,148 metres on Monte Cetona. The landscape is mostly hilly, with a plain around the Canale Mastro. Its mean elevation is around 405 metres. Since the first settlements of Etruscans and Romans, the main products of this area have been wine, olive oil, honey and the Chianina. This latter, an Italian breed of cattle originating in Valdichiana from which it takes its name, has been raised in the Italian regions of Tuscany, Umbria and Lazio for at least 2200 years. Formerly principally a draught breed and now raised mainly for beef, it is the largest and one of the oldest cattle breeds in the world. The famous bistecca alla Fiorentina is produced from its meat.

Protected as a World Heritage Site by UNESCO, Valdorcia beautiful and untouched landscape has been depicted in works of art from Renaissance painting to modern photography. Five million years of geological history have left their mark on this area of Tuscany that, today, is abundant in plant and animal species. Even the deposits of lava from volcanoes no longer active – such as Mounts Radicofani and Amiata – have contributed to the delineations and details of the area; the lava, hardened, gave form to those dark stones known as trachytes. Valdorcia extends from the hills south of Siena to Monte Amiata: endless rolling hills covered with grain or sunflowers occasionally broken by gullies and picturesque towns and villages. A fertile green valley which encompasses the Orcia river, from which the zone derives its name, and the vineyards for the renowned wines of Brunello and the newcomer on the market, the Val d’Orcia DOC. Besides the gorgeous wine resulting from a long and ancient tradition, this region is very rich in different high-quality local products such as “Pecorino” cheese of Pienza (a typical cheese made with sheep’s milk), olive oil, saffron, mushrooms, chestnuts, truffles, legumes and cereal grains.